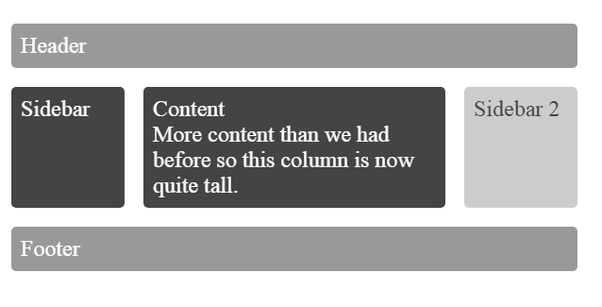 The above image shows different grids for different elements of a web page like Header, Sidebar, etc.

As you can notice, CSS Grid helps in the alignment of the elements according to the web developer. Choosing CSS Grid vs CSS Frameworks can allow you to deliver a complex web application with a lot of tables, in a very short time.

While there is no way that CSS Grid can match up with the versatility of CSS Frameworks, there are some times when a developer has to think about the two for one particular project or certain parts of the project. CSS Grid has evolved better than before expanding its functionalities. Considering you have to build a layout that is visually appealing, it is very easy if you go for CSS Grid. Using CSS Grid layout, it minimizes the efforts and layout complexities. So, if you need to change the structure anytime afterward, the other structures won’t be affected to a greater extent.

For example, let’s say you have two grids side by side and an image after the grids in the same plane. Now, in the future, if you want to add another grid in the same plane, CSS Grid will divide the required space equally without affecting the coordinates of the image.

Grids are very adaptable to the space assigned to them. It helps the elements never overlap or create certain layout problems.

Use of CSS Grid vs CSS framework is ideal in cases where you need to build complex 2-dimensional layouts that popular frameworks like bootstrap cannot offer. Building complex layouts like – Mosaic Photo Gallery or Masonry Layouts is not possible to build without using the CSS grid. The majority of CSS frameworks offer basic 12 column responsive grids that have a limited application unfit for modern cutting edge design.

Another major advantage of using the CSS grid over CSS framework is the reduced code size. With CSS Grid you can build any form of grid layout system imaginable only by relying on Native CSS style rules. On the other hand, for realizing Grid layouts using CSS frameworks, the entire framework/library CSS file has to be linked to your project. This is an unnecessary bloatware that is going to add to your project size and reducing the load speed of your website. So, when a user visits your website, a complete list of framework/library files are fetched from the server along with other resources before the webpage loads. This will drastically increase the load time of your website and hurt in SEO rankings on SERP and higher bounce rate. CSS Grids, unlike the framework, does not require any external stylesheet to work. This helps in the faster loading of your website and even in the slower connection, you do not need to worry.

A web page consists of many elements. These small elements combine together to form a layout of the web page. A layout is what you see and how you see. For example, I have placed two images side by side and a moving news column beside that. Now there are three elements here and they come under the layout. Now, if I want to change the size of the first image, maybe the column of news will get moved to the next row. This will move the elements present in the next row and the whole layout is affected. This can happen anytime since changing the layout of elements is a very common thing in web development. CSS Grids helps in this. When we use CSS Grids, the change that we do after the development does not affect the layout of the website. Now, instead of images I have a CSS Grid and I change the size of the grid, later on, it will not affect the column news panel at all.

Frameworks are huge and heavy but Grids are short and light. They are easy and quick to learn. A framework has a lot of things inside. A complete frame for your website. These things often are related to each other. A good framework user will use all of this to develop something unique because frameworks are often blamed for their monotonic layouts. This will take time and this time pushes the time limits for your projects if any. This is not the case with grids. Grids are very light and contain very few concepts as compared to the frameworks. You can easily get over the concepts in the grid and start development. There are no complexities in developing grids. You do not need to have different elements linked to each other. Grids do not give monotonic layouts. It completely depends upon the developer. Hence, the grid development is faster than the frameworks.