Why is my test automation failing for my web app?

Can anyone please tell me why is my test automation faling ffor my web app.

22 Reasons Why Test Automation Fails For Your Web Application 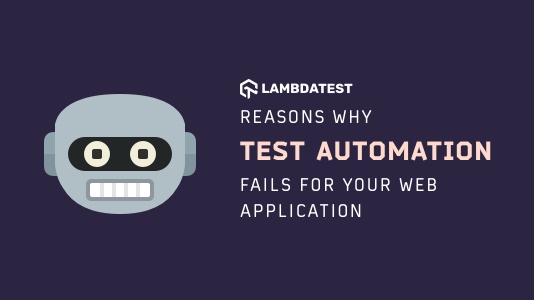 I can relate to the feeling where you wish to achieve flawless automation testing in the blink of an eye! On the other hand, I also understand the apprehension that is causing you to delay test automation.

When an enterprise has just begun the transformation, there are a plethora of challenges to overcome. Even if you apply the best practices, some shortcomings can result in wastage of automation efforts. So, I’ve decided to list out 22 reasons that in my experience, are responsible for automation testing failure.

The very first test automation failure reaps from impractical expectations. I have observed it many times in my career, once you get an automation QA or staff on-board then the management expects them to automate testing for everything. As pleasing as it may sound, it is not possible. You can’t go for a 100% automation testing as there are going to be few areas where human inspection would be mandatory. One of these areas could be around the accessibility of your web application or more.

For instance, if you are performing automated cross browser testing then the automation script for Selenium testing will render the display of your web pages across different browsers or operating systems. However, to decide if the website is rendering as per design, if the typography is well, if the text is appropriate is best evaluated manually.

Many organizations do realize the problem statement of expecting a 100% automation testing but often struggle with the following question. What can we automate & if not 100%, then how much automation can we achieve realistically for our web product?

3. Improper Management Leading To Lack Of Visibility For Test Automation

I have been a victim of improper management back when I started my IT career as an automation tester. I was working for a Service-based company and they allocated me my first project. This project had been running for a couple years then and I was handed over a list of test automation scripts, right after I joined. The higher-ups of the project were about to leave the organization and the management was too busy with the upcoming sprints to consider a thorough knowledge transition sessions from the senior automation testers who were about to leave. What happened after they left wasn’t a pretty sight? We were slammed with outages, and me being a fresher with minimum knowledge of how the various outbound and inbound processes were being impacted by numerous automation scripts, was at the hearing end from my manager. However, when I look back to that scenario I realize that it wasn’t entirely my fault. I have seen teams with a handful of members in charge of implementing automation while the others are clueless about what’s going on.

Don’t you think it’s a bit unrealistic to expect magic out of automation testing when half the team lacks visibility? Since automation has to be a collaborative effort, it is important to educate every team member about the related tools and processes, especially the freshers. You can accomplish this by holding team meetings and sessions to discuss tools, trends, and practices related to automation.

4. No Understanding Of Manual Testing Or Exploratory Testing

This may surprise you a little, another reason why test automation fails for you could be the lack of manual testing skills, or exploratory testing skills. Automating your test scripts doesn’t mean that team members can cut themselves some slack. As we know by far, that an automated approach doesn’t cover everything and that is where the challenge begins. Because now you have to dig deeper into your web-application and find critical test scenarios that were not yet revealed by your teammates.

Automation is a way to save testing efforts. Software companies should use it to minimize repetitions and automate only those elements that are less prone to changes. Once that is done, the company should allocate their resources to perform extensive manual testing or exploratory testing to find unique test cases.

5. Not Thinking Through And Scripting The Scenario

Automation seems like a one-stop destination for minimizing efforts. But a well-thought-out scenario is a must, before developing a test automation scripts. Moreover, it can take a substantial amount of execution time of your automation tests. The flexibility of frameworks and test automation tools plays a crucial role in how much time it takes to develop a scripted scenario.

Since every scenario is different, scripting is a must. Even if you think it through, it’s all a waste without scripting the scenario. Ensure that the coding skills of your test engineer are at par with the complexity of the tests. Complex tests take a lot of time to automate. Therefore, with the development of brand new features, they often don’t get a chance to discover regression bugs. Make sure you keep these things in mind before you write down your test scenario.

6. Lack Of Understanding About When To Use Automation And When Not To!

The most common reason behind “why test automation fails for your company?” is that the people are not aware of when to automate and when not to. For instance, it’s alright to automate different webpage functionalities. But it’s not a good idea to evaluate the padding, images, etc. rendering issues through test automation. If you are using coordinates to determine element locations, it can lead to discrepancies when run on varying screen resolutions and sizes.

It’s not viable to use automation when you are testing something prone to a lot of changes. If you are testing out a stable entity, automation is the way to go. Basically, mundane tasks that require a certain action to be repeated are best suited for automated testing. So test automation can comfort your regression testing process.

I have seen a false belief rampant in the IT industry. People think that any developer or tester can carry out test automation. Design, configuration, and implementation of test automation calls for a specific skill set. A tester carrying out automation should know how to articulate ideas between managers, developers, and customers. He/she should also have a clear understanding of development trends and should know what the development team is headed to.

Automation test engineers are some of the most difficult, yet, significant hires. To kickstart various automation projects, it is essential to hire testers with extensive technical knowledge. Instead of one or a few people carrying out automation testing, the entire team should be aware of what’s going on. Even though the investment in hiring technically sound staff is high, the return is worthwhile.

Since automation testing is a relatively new phenomenon, chances of failure are high. There are so many new experiments the testing team conducts that it becomes important to analyze the results accurately. After carrying out the tests, the tester has to make a thorough test report. But here is why test automation fails for you! Your team is not paying enough attention to test report analysis. If not carried out properly, the analysis can leave faults unattended and cause wastage of time, resources and efforts.

Some tests succeed and some fail in automated testing. Therefore, it is mandatory to examine test reports for faults and analyze the reason behind the failure of certain tests. It is better to conduct the analysis manually so as to uncover genuine failures. It is vital to unmask hidden problems and make sure that they don’t get overlooked due to masking by other issues.

Setting too good to be true objectives for automation seems perfect on paper. But when it comes to executing the steps, there is a severe lack of clarity among team members. The biggest problem is that the goals are vague. They lack precision and accuracy for obtaining real value from automation. What most firms do is that they start automating something very complex and end up refactoring the whole framework. As a result, the team ends up losing a lot of time, money, and effort.

You can eliminate uncertainties by starting small and working your way up to complexities. Pick out stable functionalities and begin with their automation initially. After that, gather feedback to determine what’s wrong. Once you achieve consistency in their testing, continue with other functionalities. Have a customized approach for test automation since needs can vary for different project contexts.

10. Selection Of The Right Tool For Efficient And Effective Testing

With a plethora of automation tools out there, sometimes it becomes challenging to choose the best. Improvement of the overall testing procedure and meeting real requirements is the end goal. But most teams fail to shift through the chaff and pick out the tools that best suit their testing needs. Automation testing is, without a doubt, highly dependent on the tool you decide to go ahead with. Every tool has specific capabilities. But teams lack the level of expertise needed to get the best out of these capabilities.

Moreover, firms get caught up in the hype of a particular tool. But after opting for it, they realize that it doesn’t provide everything that they were hoping to get. Plus, every team has a budget and sometimes the cost of the tool exceeds that. Before jumping on to choosing a hyped tool, carefully line out the requirements. After that, decide what you are expecting from the tool. Be very specific in setting goals and check the correspondence with user acceptance criteria for products. You can also consult experts who are experienced with the use of these tools.

Talking about automation testing tools, if you are looking to perform automated cross browser testing on cloud then LambdaTest offers you a cloud-based Selenium Grid with 2000+ real browsers and operating systems, along with integrations to multiple third-party CI/CD tools.

Junior Milton
15 1
Report
168 Views
1 Answer
3 months ago
Similar posts
Browser Compatibility: Why does my website www.kuicapital.com not load on Internet Explorer but it loads on Firefox?
Why should I choose software testing as my career?
How important is it support IE/Edge browsers for a web app? I'm not a web developer, so providing cross-browser support is going beyond my current skills.
Why should I choose the Primer CSS framework for my next project?
Why is cloud-based browser testing good for testing a web app?
Why is cloud-based browser testing good for testing a web app?
I am looking for a slack app that can allow me to take screenshots of my website from different browsers?
Why am I having trouble loading iFrames on my website while taking screenshots?
Why do some part of my website faces difficulty while rendering in IE8?
Can I perform parallel testing of my web app across different browsers using Selenium?
Close