Is Internet Explorer still exist? And if no, what led to the death of IE?

I wanted to seek some knowledge regading IE. Is Internet Explorer still exist? And if no, what led to the death of IE. Can anyone please provide me some information.

When was the last time you used Internet Explorer to browse something? Well, if you have used it recently or if you are using it quite often than the majority of people then this may come as a shock to you.

But Microsoft has discontinued IE back in 2015. The browser has ever since failed to receive any support or update from the community. Ever since the announcement was made, there has been a gradual drop in the browser market share of IE.

However, as per the above graph is evident that IE still holds a relevant market share of 5.14% by May 2019. And even though the percentage is small in comparison to Chrome which is undoubtedly the topmost utilized browser, the small percentage of IE still accounts for a significant number of users worldwide. It is why IE has been kept in the QA checklist for major enterprises too because nobody wishes to miss out on the potential lead.

Early this year, in Feb 2019, Microsoft security chief, Chris Jackson insisted people to stop using IE as it has been discontinued by Microsoft 3 years back.

“Internet Explorer is a compatibility solution. We’re not supporting new web standards for it and, while many sites work fine, developers by and large just aren’t testing for Internet Explorer these days. They’re testing on modern browsers. So, if we continued our previous approach, you would end up in a scenario where, by optimizing for the things you have, you end up not being able to use new apps as they come out. As new apps are coming out with greater frequency, what we want to help you do is avoid having to miss out on a progressively larger portion of the web!”

What Led To Death Of IE?

Internet Explorer was a huge hit back in the 90s and the start of the 21st century. But now, it has become a lost hero. There is no surprise in seeing that Internet Explorer has and is losing the market every day because of many factors that we may consider in this post. Some companies have even stopped developing their products for the internet explorer just to save their time and money. We cannot blame them for this step.

You can see that in the image shared at the top that Internet Explorer (as of 2019) captures only 5.14% of the market. This includes all the platform and all the operating systems on the desktop which was the main platform for IE. Why has IE been forgotten? What led to the death of IE? Well, there are a few reasons that are more typical.

The scene is more or less the same if I talk specifics. Internet Explorer has stopped developing new features and even implement the old ones. Even when Internet Explorer was the point of focus for Microsoft, the implementation of features was too slow. Even for those features which have been implemented in other browsers and are in the market for some time now. Some developers felt that the reason for this was that Microsoft used to analyze whether that feature is a hit and worth the investment or not because there are many features in other browsers which are not used by any developer or maybe very few. Some developers had other points of view but I have never seen a strong and loyal community towards Internet Explorer in the past decade. These lack of implementation for updates & features has been a major factor that led to the death of IE.

Edge Grabbing All Of The Limelight

Meanwhile, with the introduction of Windows 10, Microsoft introduced a new browser called Microsoft Edge and promised for it to be fast, reliable, secure and best in the market. Since then, Microsoft has shifted its way towards EDGE browser too much. This shift has led to the slow death of IE. Degradation in the sense that slowly Microsoft stopped the development of new features and enhancement of the existing features. This gradual degradation has led to the slow death of Internet Explorer. 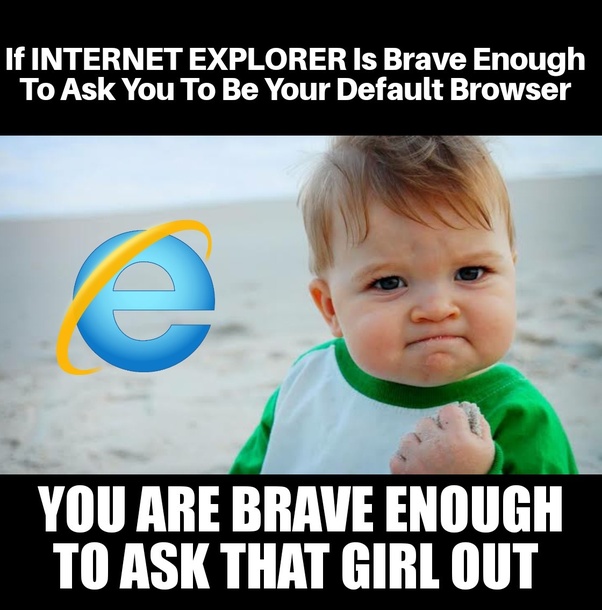 Well, even the common people who have never used Internet Explorer do not want to use after seeing such brutal comments for it. They cannot be blamed for this. Anyone would do the same, I guess. Not with respect to browsers, but with anything today. So exploitation on Social media has definitely played a part in the death of IE.

Ruled Out By The Developer Community

Today, the developer’s community is slowly diminishing in terms of the death of IE. If you open the discussion forums on the internet explorer issues or development or anything technically related to it, the posts you will see have aged a lot. Very few discussions are still alive. This directs us to one point, developers have shifted their focus from Internet Explorer and it would not be wrong to say that Internet Explorer is not even considered a priority today for development. If we discuss the features or the upcoming challenges in browsers, Internet Explorer is left out of the discussion. Developing a new feature is developed keeping in mind all the major browsers except Internet Explorer because all the new features include new frameworks which are not understood by the Internet Explorer. But no developer can be blamed for that. After all, it has been discontinued from 3 years now. As a developer, you would also not develop something solely for Internet Explorer based on the fact that the audience has decreased so much, that the time and efforts for it are not worth. So yeah, Microsoft, people and developers all have negative feedback towards Internet Explorer. This is what has led to the death of IE. But this did not happen suddenly in a day. It was a slow process just like a political event. Let us focus on the timeline from the rise of Internet Explorer to see how it went from the most used browser to the most ignored browser today, eventually leading to the death of IE.