How can I run parallel tests with selenium WebDriver?

Can anyone please give me a tutorial on how can i run parallel tests with selenium webdriver. 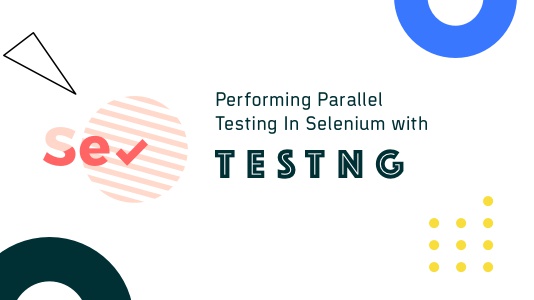 Cross browser testing can turn out to be stressful and time consuming if performed manually. Imagine the amount of manual efforts required to test an application on multiple browsers and versions. Infact, you will be

amused to believe a lot of test estimation efforts are accounted for while considering multiple browsers compatibility with the application under test.

The problem is not only restricted to manual efforts but also the requirement of a proper test bed that constitutes the presence of various platforms, multiple browsers and their versions.

Working on agile environment does not let testers enjoy the leverage of performing cross browser testing manually on multiple browsers, thereby leaving only limited time to choose which browsers to pick and leaving the rest browsers into the untested zone, hence risking your application under test.

In such scenarios, you start automation testing from scratch, which helps testing your application on multiple browsers with minimal efforts and time. You would be acquainted with cross browser testing through automation tools, but have you ever explored the idea of ensuring browser compatibility testing in parallel for automation testing in Selenium with TestNG or any other framework of your choice?

So First and Foremost, What Is Parallel Testing & How Does It Benefit Us?

In this article, I will show you how to perform parallel testing in Selenium with TestNG.

There are two ways of achieving parallel testing in Selenium with TestNG. One is mentioning the ‘’parallel’’ attribute in the testing.xml file for the desired methods while the other is setting the parallel attribute to true in your data provider annotated method.

I will be showcasing the latter in the article. In order to run parallel testing in Selenium with TestNG, we need multiple browsers setup of different versions on multiple platforms and access them. This can be achieved via Selenium grid parallel execution using which you would be able to perform multiple tests simultaneously, over numerous browsers, OS, and device combinations.

For learning the installation and configuration of the setup environment,refer to our guide for your first Selenium & TestNG Automation Script.

Parallel testing in Selenium with TestNG helps you run your tests on multiple browsers, operating systems, and machine at the same time. It uses a hub-node concept where all the tests are run on a single machine called the hub but the execution is performed by various other machines which are connected to the hub and are known as nodes which have different platforms and browsers configured on them. There can be multiple nodes but only one hub will be present in the grid setup. Parallel testing in Selenium with TestNG helps in reducing the execution time drastically.

In order to design scripts on a hub-node based architecture we need to be aware of two important concepts:

Showcasing below code snippet, that uses to set the browser, platform and version number for performing parallel testing in Selenium with TestNG:

RemoteWebdriver helps you to connect with the server, send request to it which in turn drives the local browser of that machine. RemoteWebdriver is a client-server combination which can be used when development and execution environment are running on the same or different machine. It is the best option to go with when performing parallel testing in selenium with TestNG or any other framework of your choice. The only requirement for the RemoteWebDriver to work is, it should point to the URL of the grid.

So if you are using any driver apart from remote, the communication to the WebDriver is assumed to be local for example:

The above statement will access the firefox browser of your local machine but if you are using RemoteWebDriver then you need to mention where the Selenium Grid is located and which browser you tend to use for your test. For example:

The above statement signifies your selenium server is running on localhost with port 8080 and the browser which will be instantiated is firefox. All you have to do is change the URL of the machine you wish to point to and run your tests on.

The major drawback with parallel testing in selenium grid is the limitation of access to multiple platforms, browsers and versions that helps to run your tests for cross browser testing. You only have the access to those platforms, browsers and their specific versions on which your nodes are running and eventually the larger number of nodes you connect to via hub , the performance of Selenium grid degrades drastically.

Also, adding on is the time and efforts spent on setting up the initial implementation for distributed testing. Moreover, the cost for having those multiple machines setup is another drawback of opting for parallel testing in selenium grid.

To curb these drawbacks people are now moving on to cloud based platforms to support parallel testing in Selenium grid. A lot of platforms are available in the market that provides a means to access lot of browsers, versions, platforms all at one place with no architecture setup required and no additional cost to be borne for the machine setups.

One such platform is LambdaTest which helps to run selenium scripts on a scalable, secure and reliable cloud-based selenium grid with access to around 2000+ browsers and different resolutions with multiple platforms. It provides detailed access to your tests with the support of screenshots, console logs, videos, network, etc. It makes your automation flow smoother with on the go access to integrations with multiple bug-tracking tools like Jira, slack, trello etc. A detailed level dashboard that provides you an overview insight on the number of tests ran, concurrent sessions, minutes and queues etc. With LambdaTest, you can easily perform parallel testing in Selenium with TestNG.

Performing Parallel Testing In Selenium With TestNG On LambdaTest

In order to guide through, I have built the Selenium script which verifies whether the LamdaTest homepage is open or not after user types ‘lambdatest’ on google. The following steps would be needed to kickstart with the process:

Post you signup and login on the lambdatest platform, you can access your username and access token from the settings tab under profile section. The first time you may need to generate your access keys. Once it’s been generated you can copy them and keep them stored to use them in your scripts.

The below is the code snippet highlighting how parallel testing in Selenium with TestNG is running on multiple browsers and platforms via cloud.