Should I consider Selenium automation testing on IE?

Can anyone please provide me suggetions on whether i should consider Selenium automation testing on IE or not. 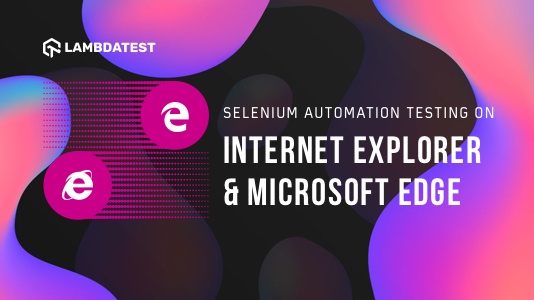 Design and Usability are two important factors when you are building a consumer web product/web application. You might need to step into the shoes of the customers in order to tackle different usability problems.

However, you may have to fill in a lot of shoes considering the fact that not all your customers would be using the same browsers as you. Cross browser testing becomes a pivotal part of every test cycle. As a tester or developer, you might be using the macOS for product development but you need to take care of scenarios where customers use deprecated browsers like Internet Explorer.

IE has been a headache for web development ever since modern browsers such as Chrome, Safari, Mozilla Firefox, and many more stepped into the picture. Delivering a slow response time, and lack of features has led the majority of IE users to switch for some other browsers. So if you have developed a website on Chrome, then, to have it tested on IE is going to be a major concern. As long as you are a windows user it may seem feasible, but what would a macOS user do?

This article is my attempt to help you perform automation testing with Selenium for testing IE on macOS, we will also be looking into Edge browser. But before we get started with automation testing, let us understand whether we really need to test IE? As many of us assume that testing on IE is a waste of time because people hardly use it, while some of us think otherwise. We will clear that dilemma as we go through.

IE might not be the most preferred browser from a web-development & design point of view but there is still a significant percentage of users that makes use of IE. As per Desktop Browser Market Share Worldwide, IE as of July 2019 holds a 5% market share in the web browser market which is a good number considering the overall number of internet users worldwide. 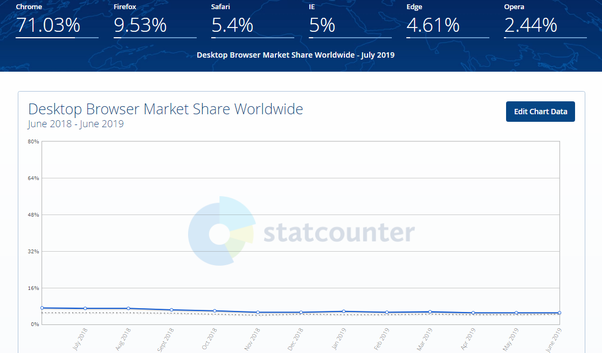 There are a significant number of end-users, as well as enterprises that use Microsoft’s Internet Explorer for browsing and performing other tasks on the web. In fact, there are many enterprises that push their testers to perform cross browser testing only on Internet Explorer(IE) for internal tasks. Hence, you might end up in situations where there are multiple ‘compatible’ browsers installed on your Mac machine but you need to test your product against Internet Explorer or Microsoft Edge. Browser compatibility testing is a core component in testing features of any web product/web application. Overlooking the same can lead to serious usability problems on the customer front.

You may argue about the reason for considering an outdated browser like IE for cross browser testing. To some extent, the argument is correct since the official support for IE was discontinued in the year 2015. There are no official updates or support for IE since that time. Though Microsoft Security Chief – Chris Jackson urged users to stop using IE three years back, there is still a significant user base that is still using IE as the default browser. In a blog titled The perils of using Internet Explorer as your default browser, Chris Jackson stated

Mac does not support Internet Explorer. However, if you are a developer using Mac, this excuse may not fly with your end clients. And that goes with your Selenium automation tests as well. You would have to find a way to run your test scripts on Internet Explorer browsers as well. There are a couple of ways in which you can test IE on macOS systems:

If you are a developer, there is a high probability where you would have made use of the Oracle VM Virtual Box. It lets you install a variety of operating systems in a virtual environment. In order to test IE on Mac, you need to install VM Virtual Box on your device. Once installed, the extension pack and installed the .dmg image on your macOS, can help you perform cross browser testing using IE on Mac.

For installation and other relevant information about Oracle VM Virtual Box, we recommend you to check this link. You might want to have a look at the relevant VM commands that can be used along with IE.

This is one of the ideal ways in which you can achieve the task of browser compatibility testing; not only on IE but a host of other browsers like Chrome, Firefox, Safari, Opera, etc. There are cross browser testing platforms like LambdaTest where you can test the nitty-gritty of your website/web application against 2000+ browsers on a variety of operating systems & devices. You can find the complete list of browsers available on the LambdaTest platform.

Porting your existing Selenium automation testing implementation that makes use of local Selenium Grid to remote Selenium Grid hosted on LambdaTest cloud servers is a simple task. You can test on IE, even if you are a macOS user without any local installation. All you need to do is select the configurations on which you need to test, declare them in your Desired Capabilities and have them executed on VMs(Virtual Machines) hosted on LambdaTest cloud servers. This requires zero setups or downtime from your end, and you can leave the maintenance part on us. So you focus on doing what you do best, coming up with awesome test cases, while we take care of providing you with all the testing environments you need as per your test script.

Another upside of using LambdaTest Selenium Grid is that you can perform Selenium automation testing with every programming languages like Python, C#, Java, etc. that offers compatibility with Selenium through bindings.

WineBottler for Mac is very much similar to Wine on Linux as both of them are used for the same task i.e. running Windows on host operating system like Mac/Linux. WineBottler 1.8.6 (stable version) is currently available for macOS:

You would need to download and install the WineBottler application on your Mac machine/device. Once installed, you can start using IE that is available by default with the installation. The only downside about such an approach is that you need to again install your entire software development environment on the virtual Windows OS to use Selenium automation testing framework for automated cross browser testing.

4. Installation of Windows on Mac

In case you are keen to have a dual-boot kind of setup on your Mac machine; you should opt for installing a Windows operating system on a Mac.

Before going ahead with this option, it is important to check whether the version of macOS which you are using supports Windows or not. In case there is support, you need to follow the necessary steps for installing Windows on Mac. Once the installation is complete, you need to restart your machine after which you would be prompted to select your preferred OS (Mac/Windows) to boot the system/device. Though this is a local Windows installation, you still need to go through all the necessary steps to perform Selenium Automation Testing with Python or any other programming language.

0 Votes
Posted 4 months ago
Devan Skeem
675 5
Report
246 Views
1 Answer
4 months ago
Similar posts
How can I test web applications built on WordPress? I have no background in software testing. What tools should I study and use?
I want to learn to perform software testing. Please guide which books should I refer?
How can one test IE on a Mac?
I want to learn JavaScript, Can anyone suggest which latest frameworks should I focus on?
How can I test my website on IE and Edge browser on Mac machines?
What's the easiest way to run Selenium tests on IE if I have Mac machine?
I am a Mac user and I am looking for a way to test my website on IE. Is there a way to do so?
Should you consider Microsoft Internet Explorer (IE) for cross-browser testing?
How can I perform testing on IE if I am using Mac machine?
Close