What are the top skills of successful automation tester in 2020?

Can anyone please suggest me some of the top skills of successful automation tester in 2020. 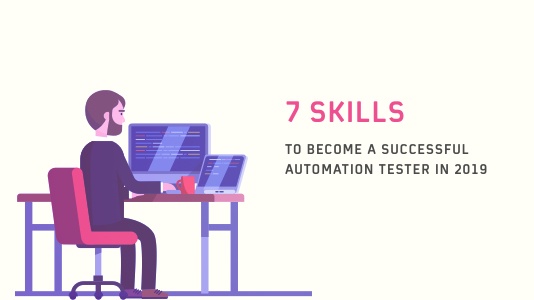 With new-age project development methodologies like Agile and DevOps slowly replacing the old-age waterfall model, the demand for testing is increasing in the industry.

Testers are now working together with the developers and automation testing is vastly replacing manual testing in many ways. If you are new to the domain of automation testing, the organization that just hired you, will expect you to be fast, think out of the box, and able to detect bugs or deliver solutions which no one thought of. But with just basic knowledge of testing, how can you be that successful test automation engineer who is different from their predecessors? What are the skills to become a successful automation tester in 2019? Let’s find out.

When I started my job as a manual tester, I did not like coding that much. However, when I gradually switched into the automation domain, it became very clear to me that without some basic understanding in programming languages, there is no way for me to write a logical automation test script.

Having a little background in programming will not only simplify those automation scripts, but it will also help you to improve communication with the developer. Not only that, but you can also participate on in-depth functionality testing, once unit testing is completed. Now, to attain the #1 skill for automation tester, there are 2 different aspects and how much programming knowledge is required depends on your role and where do you see yourself in the industry after a few years. The aspects are

You are required to have a thorough understanding as well as coding skills in C#, Python, Java, Perl, SQL, XML as well as HTML and CSS. Although, what language you should be proficient in depends on the programming language used by the developers in the project. For example, if the project is on Ruby, you should have at least basic knowledge behind the fundamentals of Ruby. Here are the top programming languages helpful for testers.

Whether you should have programming knowledge or not, in this phase depends upon the automation framework used. If your organization is using SpecFlow or Cucumber for test automation, the scripts can be written in plain English where you don’t have to think about backend logic or coding. Only having sufficient knowledge on Selenium web driver is enough. However, if you are using UFT or QTP, you should have a thorough knowledge of programming. Here is a Selenium WebDriver tutorial for cross browser testing.

To become a skilled automation tester, you will be required to have a keen eye and experience in manual testing as well. Remember the following!

Human Perspective Is All that Matters

Whenever something looks a bit off while testing, the human eye can detect it easily. Visual issues are difficult to detect using automation scripts. Viewing software from the perspective of a real-time user helps the tester to identify UI and usability testing for finding bugs which is a difficult feature to program in an automation script.

Some Testing Can Only Be Done Manually

Automation is a machine and a machine only does what it is told to do. Complicated tests require a lot of preparation and planning and also has certain boundaries. The script then follows the protocol and tests the application accordingly, Ad-hoc testing helps testers to answer questions like “what happens when I follow X instead of Y”. It helps the tester to think and test using an out of the box approach, which is difficult to program in an automation script. Even visual cross browser testing need a manual approach. Instead of depending on an automated script to find out the visual differences, you can check for the issues manually either by testing on real browsers and devices or even better, by using cloud-based, cross browser testing tools like LambdaTest, which allows you to test your website seamlessly across thousands of different browser-device-operating system combination

An automation script is just like another piece of code. And no matter how good a coder you are, bugs are always there. Having a manual touch throughout the testing procedure instead of depending entirely on automation will ensure that there are no false positives or false negatives as test results after a script is executed.

Certain Scenarios Are Not Feasible For Automation Testing

What if the testing phase demands you to check how the gesture or touch feature of an application is working? You can’t do that via automation. The procedure will be too costly and there may be some inaccuracy in the result. Manual approach once again becomes necessary. By the time, a tester finishes writing automation scripts of such user control scenarios, a manual tester completes the entire testing as well as bug fixing.

You Get An Idea About The Whole Problem

Yes, it is true that automation testing saves a lot of time. One a wider level and performing repetitive testing of the same scenario, it is an ideal choice to automate the tests. However, for understanding what the exact problem is on a theoretical level, manual testing skills are required. An automation tester who is also experienced in manual testing can easily understand the source of the problem by thinking from the perspective of an end user.

In the current Agile age, the industry demands speed as well as quality. Stakeholders and clients worldwide expect an organization to deliver a good quality bug-free application in a small time. That is why, automation testing is on the rise, and being a skilled automation tester, every organization will expect you to have knowledge and experience in the following automation tools.

Proudly supporting all major browsers, Selenium has become a household name in the world of automation testing. Almost all major browsers ensure that Selenium is a native section of them. And with the introduction of WebDriver, Selenium ensured flawless execution of browser-based web application automation testing. No matter whether you are a fresher or an experienced test automation engineer. You should have knowledge or working experience in Selenium. Plus, it is open-source! If you are already working on any variant of Selenium then you will find LambdaTest to be a very promising platform for executing your automation scripts on the cloud. LambdaTest offers parallel test execution for automation testing with Selenium on more than 2000 browsers with their online Selenium grid.

Previously known as QTP, this tool by HP is still the best one in the industry that ensures smooth execution of automated functional and regression testing of an application. If you are a regression tester, you should have knowledge and experience, as well as certification in UFT.

The perfect tool to test web services and API. This tool supports both SOAP and REST services and if your project demands automation testing of API, you should have knowledge on at least the open source version of this headless tool meant for functional testing.

Rational Functional Tester is IBM’s in house developed automation tool. No matter what technology is used for your application, RFT http://supports.Net, Java, SAP, Adobe Flex, Visual Basic and Dojo. If you are into functional or regression testing, you will find learning this tool to be highly useful.

In the current mobile first age, many organizations are developing complex mobile applications. Appium is the best open source software that makes automation testing a reality for any hybrid or native mobile app. Besides, it is compatible across all OS like Android, iOS or Windows and is must to learn if mobile application testing is your domain.

Initially, this tool was designed for measuring the performance and load testing of an application. In the current versions, this tool is also used for API performance and service testing. Being the 3rd most popular automation testing tool, your organization will expect any skilled automation tester to have knowledge and experience on it. Even if you don’t have experience, you can start learning by yourself since the tool is open source.

If your car or motorcycle is having an issue and you take it to the service center, before examining the vehicle, the mechanic asks you about the current problems you are facing while driving, any old vehicle issues that you got fixed during the last servicing, along with if you changed any parts previously. Only after that, the mechanic is able to provide a solution regarding what exactly the problem is and what you need to do to get it fixed.

Similarly, a skilled automation tester must know the application inside out, from both frontend as well as the service layer before the testing phase begins. They must know

Popular test automation tools are quite large and complex and it requires the tester to have detailed technical knowledge about the tool itself before your project starts using them. In my previous projects, I have often faced scenarios like

These, known in the industry as false negatives and false positives, mostly happens when the testers do not have sufficient knowledge in configuring the test scripts. They just keep on using templates and expects the test to run successfully. If you want to become a successful automation tester, you should have detailed knowledge in configuring the tools and how to troubleshoot them when scenarios like false positive and false negative arise. Especially, if you are a test lead, you must be sure that the architecture of the application is compatible with the tool meant for running the automation test. Trying to use a tool that is not compatible with the application will result in unsuccessful test cases and unforeseen errors which may be difficult to troubleshoot…(more)