What are the common myths about software testing?

Can anyone provide me some knowledge relating to some of the common myths about software testing.

If there is something that has registered constant growth and evolution over the years, it has to be software testing industry.

According to a study conducted by Technavio, the Global Software Testing System Integration Market is expected to grow at a CAGR of +15% over the period 2018-2022. Thus, the field is on an all-time high and there is no looking back for a couple of coming years at least.

Citing the trends, it can easily be predicted that major brands will start taking up improvement initiatives on priority thus resulting in the delivery of quality software. This further indicates towards a growing need for competent software testing professionals, which unfortunately is not being met.

A lot of engineers generally prefer taking up development as compared to testing as they consider this as an inferior profile. The conception has been nurtured over the years with a lot of myths. Let’s have a quick look at top 13 software testing myths and bust them to discover the truth -

1. Testers Are Responsible For The Quality Of The Product

One of the most common myths that prevail in the software testing industry is that testers are responsible for ensuring the quality of the product in general. It is the responsibility of the tester to identify the bugs in whatever has been given to him for testing.

However, the tester has no role post this except for verifying if the bugs are fixed or not. Fixing the bugs or releasing the software is solely the task of the stakeholders or the developers.

2. Testing Is A Time-Consuming Process

A common myth about the testing process, especially among the beginners, is that testing is a very time-consuming process and must be avoided in order to save the overall time that goes into product development.

However, the fact is that testing is probably the least time consuming out of all the phases of software development life cycle. Here is a pie-chart depicting the effort distribution amongst various phases of SDLC -

Diagnosing the bugs and fixing them obviously takes time, but that is a story for another day.

3. Only Fully Developed Products are Tested

A lot of developers believe that they need to wait for the coding to be done completely before getting started with the testing process.

But, the fact is that you may test the product feature by feature and even fix the diagnosed bugs simultaneously. Yes, testing depends on the source code but reviewing the user requirements and developing the required test cases is independent from the developed code. Beginning with the testing process as early as possible will save you a lot of time. Employing an iterative or incremental approach to software development considerably decreases the dependency of testing on the fully developed software.

It is not possible to execute some of the scenarios and they can be executed or tested once the project has been deployed.

5. A Tested Software Is Bug-Free

Testing is an efficient process and its expected outcome is a bug-free product.

Despite the best efforts of the test engineers, project managers, and the management team, some bugs manage to creep in or some features remain left untested.

In case a software application has been tested, nobody can claim with surety that it is 100% bug-free. The expertise of the tester is not a metric of the quality of the end product.

6. Missed Defects Are Due To Testers

A tested software product is ‘supposed’ to be defect free but that does not mean that the tester can be blamed for the defects that creep in.

Bugs are subject to Time, Cost, and Requirements changing Constraints and it is unfair to blame the tester alone for any defects, whatsoever.

7. Testing Is An Expensive Process

Well, testing may come across as an expensive process but it actually is a long-term investment. You can either pay less for testing during the initial phases of software development or cut the initial cost and later pay more for maintenance of the software or revisions demanded by the users due to overall poor functioning of the product later. 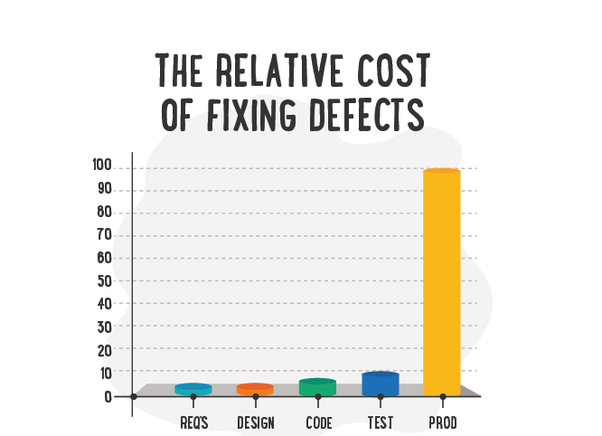 With early testing, the advantage is that it saves your time, energy and resources other than money. Hence, if you are just avoiding the testing of your product because it seems like a costly affair, you need to reconsider.

Cutting the testing cost may even render the product useless later due to extremely poor usability and a large number of bugs.

8. Test Automation Should Be Used Wherever Possible To Reduce Time

It is a fact that automation testing reduces the overall time that goes into the testing process and speeds up the testing cycles considerably. However, not everything should be automated. 100% automation is practically not possible and there always is room for manual testing.

Ideally, automation should be started once the software has been properly tested manually. Also, only those parts should be automated which are extremely time-consuming. Moreover, it is stupid to use test automation if the requirements keep changing.

9. Anyone Can Test A Software Application

Testing is a creative job.

Clients and stakeholders believe that just about anyone can perform testing. However, testing is a process that demands expertise and knowledge of the field. It demands strong analytical skills and the ability to think of all the possibilities where the product may crash.

10. A Tester's Only Task Is To Find Bugs

Another common myth about software testing is that a tester’s only job us to identify and report the bugs.

But, the fact is that the testers need to have an overall general understanding of the working of the software along with the impact and dependence of one module on another module. Only then can they judge if it is meeting the requirements or not.

Users are smart these days. No longer do they accept whatever is served to them and this indirectly has increased the demand for competent software testing professionals. Thus, software testing today offers a lot of opportunities for career growth at attractive remuneration.

A lot of engineers are even taking up software testing as a preferred job!

Thus, these were some of the most common myths about software testing and the actual facts related to them. Software testing is a dynamic world. It is ever changing and new trends can be witnessed every now and then. With the introduction of online testing tools, the field has undergone a sea change.

For instance, earlier the testing of a website for cross browser compatibility used to be an uphill task. But now, tools like LambdaTest, Crossbrowsertesting, saucelabs etc have made the job a lot easier and enjoyable. It is a real bliss to work with the awesome interface of the tool that lets you perform cross browser testing on more than 2000 real browsers and makes sure that your users do not suffer at all due to browser incompatibilities.