What is the best automation framework for running scripts written in Javascript?

Can anyone please suggest me What is the best automation framework that one should use for running scripts written in Javascript.

The first place in our list of top JavaScript frameworks for 2019 without a doubt goes to React JS. React is a highly efficient and declarative JavaScript library used for building interactive UIs. It was created by Facebook engineer Jordan Walke and launched in May 2013. In the past 5 years, React has overtaken rival Angular JS and firmly established its dominance. React is used to create reusable user-interface components for each state, that can automatically update and render data without the need of reloading the page. Remember though, that React is a library and not technically a framework. It is mainly used to handle “V” (view) layer in the MVC(Model View Controller) model for web and mobile apps. Apart from web applications, React can also be used to create native mobile application supported by both android and iOS. With so much to offer, React JS reigned 2018 over other frameworks and I believe React JS will continue to dominate in 2019 too. 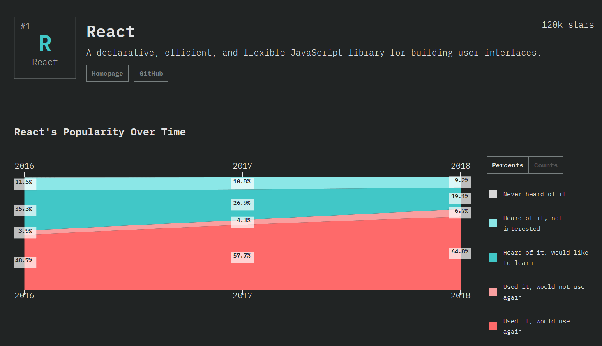 Why REACT Is One Of The Top JavaScript Frameworks For 2019?

Holding the second place on top JavaScript frameworks for 2019 is Vue Js. Vue is an open source javascript framework meant to streamline UI design. It was created by Evan You and released in 2014. The last couple of years have a witnessed an explosion in popularity of Vue which has grown by leaps and bounds outpacing AngularJS rival framework by google in 2018 State of JS survey.

The key focal point of attraction of Vue is its progressive nature which helps it to adapt to developer’s needs. It is built on concepts from other frameworks and libraries like angular and react and offers a compact lightweight solution incorporating all the best features and practices. 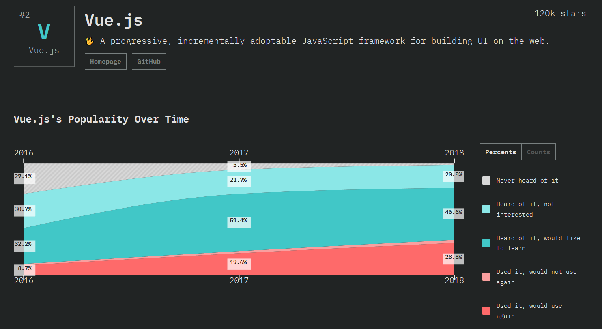 Why VUE.JS Is One Of The Top JavaScript Frameworks For 2019?

Angular is a front end web applications framework based on typescript. AngularJS or Angular 1 was built by google engineers when Misko Hevery and Adam Abrons and launched in 2010 while angular 2 was launched in 2016.

Angular is arguably the oldest modern javascript framework that let users built dynamic interactive websites. In spite of being the oldest, Angular JS is still considered as developer’s first choice for a heavy volume of developers worldwide which is why it is one of the top JavaScript frameworks for 2019. 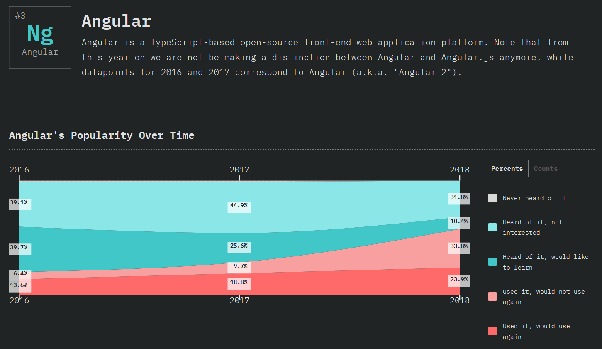 Why ANGULAR Is One Of The Top JavaScript Frameworks For 2019?

As far as backend is concerned, the top JavaScript frameworks for 2019 is Express.js. Express is an open-source standard framework for Node.js. Express is used to create server-side web applications and APIs. It is critically acclaimed for its simplicity, flexibility, scalability and minimalism by node js developers worldwide. Launched by TJ Holowaychuk in Nov 2010, Express JS is primarily used alongside Angular or react and forms the server-side framework layer in MEAN or MEARN stack. 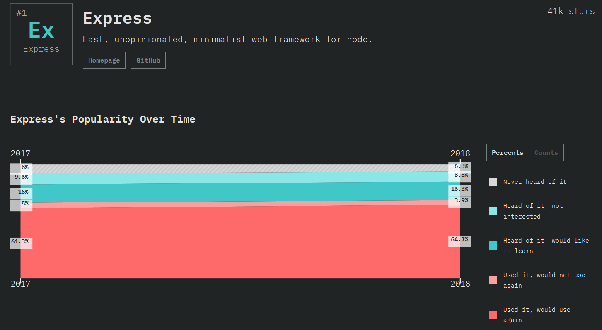 Why EXPRESS Is One Of The Top JavaScript Frameworks For 2019? 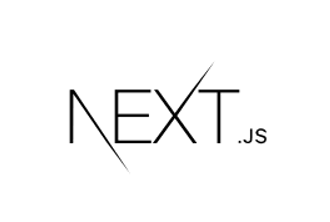 The 2nd backend framework in our list of most popular JavaScript frameworks of 2019 is Next,js. Next is a server-side rendering tool which has earned the status of universal back-end framework for React. Next.js was created by Zeit Startup and launched in 2017-2018. Apart from server-side rendering Next.js also offers client side rendering along with automatic code separation and hot code reloading. Next.js is being tipped as a potential challenger to end the dominant reign of express.js.

Why NEXT Is One Of The Top JavaScript Frameworks For 2019?