Which is the best framework for automation testing?

There are a number of frameworks that are applied on automation testing, can anyone suggest me some and teel me which one is the best.

Home > xUnit.net is another popular test framework in C# that is used for Selenium automation testing. ‘x’ in xUnit stands for the programming language for which the test framework is built i.e. JUnit for Java, NUnit for C#, etc. It is a Selenium C# framework that is built by the creators of the NUnit framework.

Instead of planning for incremental changes in the NUnit framework, the creators decided to build a new test framework that is more robust and is built around the community that uses it. Below are some of the reasons why Home > xUnit.net was built: 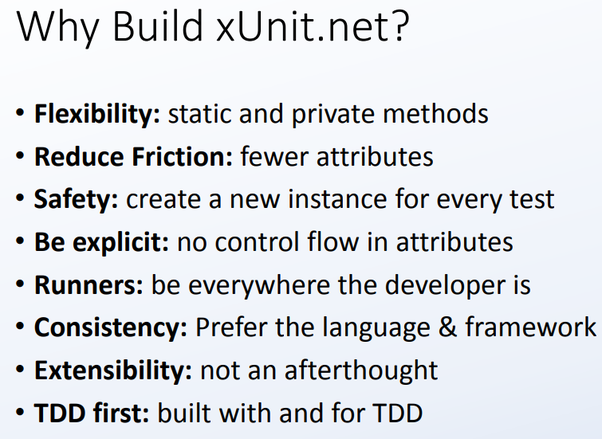 The latest version of xUnit framework is 2.4.1. xUnit is more robust and extensible when compared to the NUnit framework.

Gauge is another popular test automation framework that is used to create readable and maintainable tests using C#. Gauge is open-source and the framework is created by ThoughtWorks Inc. and developers/creators behind the Selenium. The latest version of Gauge for C# is 0.10.6.

The Gherkin language is used for the creation of feature files and spec files are created using markdown language. As tests are in Markdown, it reduces the effort for test code creation and maintenance.

Used mostly for development that is acceptance test-driven as well as for acceptance testing, Robot Framework is one of the top Python test frameworks. Although it is developed using Python, it can also run on IronPython, which is .net-based and on Java-based Jython. Robot as a Python framework is compatible across all platforms – Windows, MacOS or Linux.

Used for all kinds of software testing, pytest is another top Python test framework for test automation. Being open source and easy to learn, the tool can be used by QA teams, development teams as well as individual practice groups and in open source projects. Because of its useful features like ‘assert rewriting’, most projects on the internet, including big shots like Dropbox and Mozilla, have switched from unittest(Pyunit) to pytest. Let’s take a deep dive and find out what’s so special about this Python framework.

Unittest or PyUnit is the standard test automation framework for unit testing that comes with Python. It’s highly inspired by JUnit. The assertion methods and all the cleanup and setup routines are provided by the base class TestCase. The name of each and every method in the subclass of TestCase starts with “test”. This allows them to run as test cases. You can use the load methods and the TestSuite class to the group and load the tests. Together, you can use them to build customized test runners. Just like Selenium testing with JUnit, unittest also has the ability to use unittest-sml-reporting and generate XML reports.