What are the benefits of automated testing?

17 Key Benefits Of Automation Testing For A Successful Release 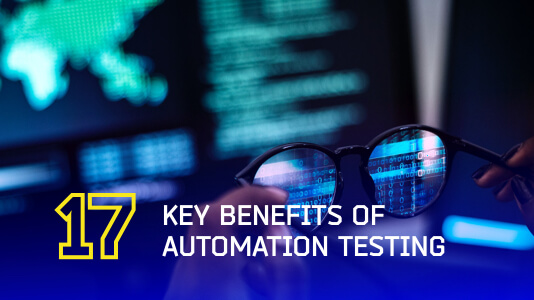 With the increasing pace of technology, it becomes challenging for companies to manage the quality of their web applications. Due to the limited time window in agile development and cost factors, testing often misses out the attention it deserves.

Lack of proper testing leads to the bad quality product, delayed delivery, unsatisfied custom service and increase in costs. The reason behind such issues can be an unplanned test management strategy, delay in development and underestimated the effort of creating a test case.

No doubt that the test engineers try to catch bugs or errors before releasing the product. However, bitter truth be told, you can’t catch every bug! So you deploy a quick fix post your migration to production and then regression testing comes into play. Regression testing is very time-consuming but relevant to maintain product stability. In such scenarios, you will find yourself stuck in a vicious cycle where your deployment window will continue to grow narrow. How do we cope with such scenarios? The answer would be automation testing.

In contrast to manual testing, automation testing is an effective way to improve the effectiveness and coverage of the testing process. It came into existence to speed up execution cycles, exempt testers from repetitive tasks, reduce human efforts and provide instant feedback.

What Is Automation Testing? Automation testing is a process that involves an automated tool to execute test case suite and predefined actions on a software application. The testing tool takes actual outcomes and compares it with the expected result to generate detailed test reports.

Since test automation demands a considerable investment of resources and money, we should define when to do automation, the scope of the automation and best tool of automation. Good planning practices can save us from high costs. You can find answers to all these questions in our blog to help you start automation testing from scratch.

Benefits Of Automation Testing Now, that we are done with the introduction, it is time to look at the key benefits of automation testing to help you eradicate the ambiguity on whether automation testing is the right choice for your organization. Here we go!

1. Schedule Your Test Execution 24/7 One of the major benefits of automation testing over manual is the flexibility to execute testing at any time, from anywhere in the world. For performing manual testing you would need to work your way out through a computer for testing a web application. You can’t carry your computer, laptop, everywhere. Also, if somebody asked you to perform a round of testing at 3:00 am in the morning after a long day at work. I am sure you will not find your mood to be very pleasant over the thought. Let alone your comfort.

This is why automation testing is better than manual testing, as in such scenarios you could schedule your test case execution to run at any hour of the day, remotely from any location and analyze the test results by reports generated on the basis of your test suite execution.

2. Easy Regression Testing Manual testing is time-consuming as for every fix deployed in production, testers have to repeat a set of similar test cases over the same period to ensure that the bug has been removed. Regression testing has been a pain point for every developer. Performing the same test over and over, not only takes more time but also brings down the overall efficiency of a tester.

Performing regression testing manually consumes a lot of time and leads to the following issues:

? Running the entire regression creates congestion in the release cycle making it inflexible. ? Manual regression testing cannot be thoroughly performed every time the software gets updated because of the time constraints. ? Unsurity about whether tests are performed the same way every time.

However, the automated test scripts are reusable; you don’t always need new scripts even if the OS version on the device gets changed. It is possible to redo the same test again without forgetting any steps.

With the automated testing tools, test scripts can be reused as many times as you need, ultimately saving both time and efforts.

4. Powerful Test Reports To Help You Analyze Hundreds Of Test Cases With Ease! In the case of manual testing, testers have to report each other manually to know how many test scripts have been written and what all bugs have been fixed. The whole process is cumbersome and leads to dependency on each other.

On the other side, it is possible for the test automation engineers to view what other engineers have worked on, what scripts have been written, what all test other testers have performed and what bugs were discovered and fixed with the help of clear reports for automation testing.

LambdaTest offers API for automation testing with Selenium to help you extract every inch of information related to automated test suite execution on LambdaTest, even without logging into our platform.

Junaid Ahmed
180 3
Report
207 Views
1 Answer
2 months ago
Similar posts
How can I perform cross browser testing of my web application?
What are the principles of exploratory testing?
What are the rules and techniques of exploratory testing?
What is the best method of testing software?
What type of testing can I use for testing a website's design and responsiveness?
What are some of the main challenges of implementing test automation when it comes to software performance?
What is the way to learn all kinds of interview questions for manual testing?
What is the best idea for Testing (Manual and Automation)?
How do I know the trend of where the Software Testing heading to?
What are the best certification courses for automation testing?
Close