What are some good Unit Testing Frameworks For Selenium Automation?

What are some good Unit Testing Frameworks For Selenium Automation? 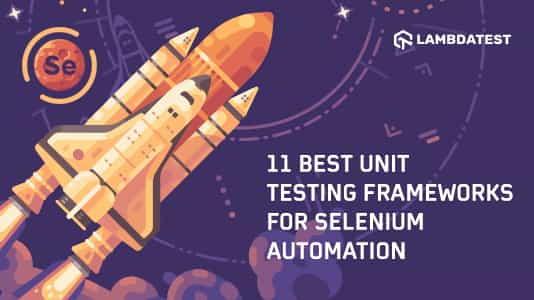 In every software development life cycle (SDLC), unit testing is considered as the first level of testing, which is performed before integration testing. Earlier, manual methods were used to carry out unit testing of an app, which was very time consuming and hectic. However, with time, automation has taken the place of manual approaches that make it easier for programmers to perform unit tests quickly. To automate unit testing, developers need a reliable and secure testing framework that can test all components of the web app with ease. For most testing scenarios, Selenium Automation Testing is considered an ideal option. But, when it comes to unit testing, developers need a modern automated unit testing framework that can create automated unit test cases and quickly integrates with Selenium. Also, as various web apps are developed with different programming languages like Java, C#, Python, etc., a compatible Unit Test Framework is required for every programming language. Today, we will talk about automated unit testing of a web application, and what is the best Unit Test Framework for most popular programming languages for Selenium Test Automation.

Developers use a Unit Test Framework to automate unit tests, which also allow them to verify the correctness of the code. The process of unit testing follows four steps, which includes:

Selenium JavaFrameworks for Unit Testing Java has always been used as the first language for developing dynamic and robust web applications. It provides the flexibility that developers need to create effective web apps. So, when it comes to unit testing of Java-based web apps, there are minimal Unit Test Frameworks available, such as:

1. JUnit JUnit has always been the first choice of developers to automate unit testing of a java-based application. It was developed by Erich Gamma and Kent Beck as an instance of xUnit. JUnit was specially developed for scripting and performing repetitive test cases. But, it can also be utilized to automate testing of web applications by integrating it with selenium webdriver.

JUnit is a java-based framework, but you still need access to a few things for using this framework to its full potential.

2. TestNG TestNG is an open-source testing framework created by Cedric Beust. TestNG covers a wide range of test categories which includes unit, functional, end-to-end, integration. It is being widely used by Java developers to unit test developed web applications. It was designed to overcome the competencies of JUnit. That’s why it is more robust, reliable, and featureful than JUnit. It provides developers with various functionalities, such as grouping, sequencing, and parameterizing, which allow them to create more flexible test cases while eliminating the drawbacks of JUnit and to automate unit tests.

Prerequisites To install and run TestNG scripts on your workstation, you need the following things that are almost similar to JUnit installation:

JavaScript is also amongst some of the most dynamic, high level, and interpreted languages, which is ideally used for HTML Web applications. Besides, it is also used for accessible web documents like PDFs or Desktop widgets. JavaScript unit testing is either performed in the browser or on the frontend. But, developers often face multiple challenges while executing it, such as ‘unable to load example.js,’ version control, etc., which results in the requirement of a robust JavaScript Unit testing framework. There are more than 10 JavaScript unit testing frameworks available in the market, but two of the most widely used frameworks are:

1. JEST JEST is an open-source JavaScript testing framework, which is maintained by Facebook. It is the first choice of developers for JavaScript testing. Although JEST can cover unit, functional, end-to-end, integration tests, a significant number of JavaScript developers use JEST to automate unit tests. What makes it an ideal choice for developers is the zero-configuration testing experience that it offers. Although it is a universal unit testing framework, it is widely used for applications based on React and ReactJS. Moreover, the convenient and unambiguous interface of the framework makes it even more comfortable for developers to execute unit testing.

Prerequisites JEST requires minimal configuration and maintenance to automate testing of your web app. Few resources that you need to run your tests on JEST include:

2. Jasmine Jasmine is another open-source JavaScript testing framework introduced in 2010. It can test every JavaScript application, which is not even supported by JEST. Besides, it provides additional support for Behavior-Driven Development (BDD), which ensures that each code snippet of the JavaScript statement is appropriately unit tested. Jasmine proved to be very useful for frontend testing, which includes both responsiveness and visibility testing of web app UI across multiple devices and resolutions. Although majorly used for asynchronous testing, it can be a pretty good Selenium JavaScript framework to automate unit testing.

It’s pretty easy and straightforward to implement Jasmine on your workstation. All you need is a little knowledge of the following things: